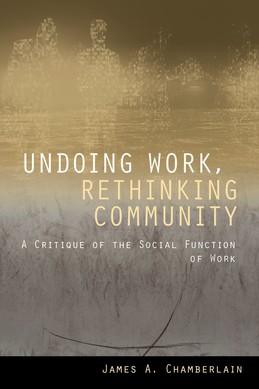 How and why does full citizenship depend upon paid employment? Undoing Work, Rethinking Community argues that, in our current work society, paid work and the civic duty to perform it substantially undermines freedom and justice. Given this, what should we do to better realize those values? And can we effect meaningful change within the framework of capitalism, or might the enactment of a post-work community entail a more radical transformation? To answer these questions, this book traces the political significance of work to the belief that community and even civilization as a whole are the products of work. Having done so, it explores the openings and limitations for expanded freedom available within contemporary society, investigating in particular the regime of flexibility and the unconditional basic income (UBI). While both offer prospects for greater freedom and justice, they also incur the risk of shoring up the work society rather than challenging it. Flexibility and the UBI can help us transform the work society, but to do so we must also reconfigure the value and place of paid work in our lives. In addition, we need to rethink the meaning of community at a deeper level, and in particular, abandon the view that community is constructed by work, whether paid or not. This task raises significant political and theoretical challenges, but Jean-Luc Nancy’s pioneering work on the “inoperative community” provides key philosophical guidance. Moreover, since the relational ontology of this alternative view of community stands in stark tension with capitalism, a liberal-reformist approach to lessening the burden of paid work that fails to tackle the underlying economic and social structure offers only limited gains in terms of freedom and justice. Moving beyond the work society therefore entails nothing short of a new conception of community and the struggle against capitalism.

Tackling global injustice requires appropriate and effective institutions as well as cosmopolitan solidarity. This paper assumes that the ‘constitutionalized world society’ theorized by Habermas offers a viable proposal to make the protection and promotion of human rights more feasible. His account of solidarity, however, reveals a conundrum: If strong forms of solidarity grow out of shared political institutions and a related collective identity, but it is precisely those institutions that we need to enhance at the global level, then how can we build sufficient solidarity to support this process? Habermas relies on a global consensus on human rights, but I argue that his version of cosmopolitan solidarity is too weak to motivate the measures needed to fully realize economic, social and cultural rights and the package of institutional reforms that he proposes. We thus need a narrative of the human condition that can lend additional support to the idea of human rights and cosmopolitan duties. I find the seeds of such a position, which I call cosmocommonism, in the work of Nancy. Having shown how this can motivate cosmopolitanism and support for human rights, I then consider in the conclusion its compatibility with the political institutions that Habermas proposes.
“Challenging Borders: The Case for Open Borders with Joseph Carens and Jean-Luc Nancy.” Journal of International Political Theory (2019) https://doi.org/10.1177/1755088219859919
​

Joseph Carens develops one of the most prominent cases for open borders in the academic literature on the basis of freedom and equality. Yet the implementation of his social membership theory would mean that immigrants who have not yet lived in a country long enough to become members would be excluded from political and social rights, thus raising the possibility of their domination and subordination by citizens. Given that these problems arise because Carens aims to balance the freedom of individuals with the “claims of belonging” to a political community, can we theorize the relationship between freedom and community differently? French philosopher Jean-Luc Nancy does just that, by showing how to think freedom and community as mutually constitutive. Nancy thus offers the resources for an alternative case for open borders, grounded on the claim that the freedom of communityentails openness to the outside. Drawing also on Nancy’s account of the common and of democratic politics, my Nancean argument for open borders challenges Carens’s exclusion of nonmembers from the rights of citizens, emphasizing instead the need for an ongoing political struggle to expand who is eligible to claim rights as well as the scope of the rights themselves.

A Google search of “freedom of the seas” reveals that the term names not only a doctrine of international law but also one of the world’s largest cruise ships. Indeed, the vast majority of the top fifty results refer to the Royal Caribbean Freedom of the seas rather than to the principle that the ocean (or at least parts thereof) should fall outside state sovereignty. Naming a cruise ship “Freedom of the seas” makes good business sense: it promises a hedonistic escape from the constraints and responsibilities of everyday life, while also conjuring the comforting image of a potent ship mastering the unruly seas. Yet only the world’s affluent can afford to purchase this freedom, and even then, only for a short time. As this and similar ships sail the world’s oceans satiating the desires of thousands of revelers at a time, they do so alongside considerably less seaworthy and luxurious vessels carrying passengers for whom the ocean also promises an escape, but in their case from civil wars, terrorism, economic collapse and other extreme hardships. In international law the freedom of the seas applies only to international waters, while states exercise degrees of sovereignty over territorial waters, exclusive economic zones, and contiguous zones. The legal doctrine of the freedom of the seas may not therefore appear pivotal to the attempts of migrants to cross borders, since even if they manage to navigate freely through international waters, states lawfully patrol their territorial waters to prevent infringement of their immigration laws. Despite this, revisiting the arguments for the freedom of the seas developed by the Dutch jurist Hugo Grotius in the seventeenth century yields the germ of a much more radical argument for No Borders. Paradoxically, though, it is not the strengths of Grotius’s arguments that help build this case but their weaknesses.

"Minoritarian Democracy: The Democratic Case for No Borders," Constellations: An International Journal of Critical and Democratic Theory 24, no. 2 (2017): 142-153

Borders draw criticism for their violation of liberal equality, negative impact on economic growth, and contribution to the exploitation of labor, but is there a specifically democratic case for No Borders? As this essay shows, democratic theorists have drawn attention to the logical impossibility of constituting the demos by a democratic decision. But even though the cosmopolitanism of Arash Abizadeh helps us see that current borders fall short of democratic standards, it does not supply resources with which to mount an affirmative democratic case for No Borders per se. Radical democracy, particularly the work of Jacques Rancière, helps understand the struggles of migrants and other excluded groups as instances of democracy, yet it too fails to offer a principled democratic argument for No Borders. Turning to Gilles Deleuze and Félix Guattari, and building on their concept of “becoming-democratic,” I develop the concept of “minoritarian democracy,” which entails a deliberate effort to dismantle majoritarian identities in favor of the becoming-minoritarian of everyone, and thus the elimination of borders. The conclusion examines the relationship between minoritarian democracy and other approaches to the boundary problem, and responds to potential objections.

"Migration and the Politics of Life.," Theory and Event ​19, no. 2 (2016)
This paper argues that migration controls not only harm migrants, but they also limit the vitality and hence freedom of receiving states. To do so it draws on Esposito’s theories of immunization and biopolitics, grounding them on a concept of life as impersonal becoming that rejects the use of borders to exclude people, and that highlights the life- and freedom-enhancing effects of unfettered mobility. This concept of life thus leads to the obligation to dismantle multiple barriers to becoming. In relation to migration, this obligation includes the duty of unconditional hospitality, which in turn requires open borders.

"Bending Over Backwards: Flexibility, Freedom, and Domination in Contemporary Work," Constellations: An International Journal of Critical and Democratic Theory 22, no. 1. (2015): 91-104

​This article shows that flexibility constructs an individualistic social formation by dismantling collective institutions and empowering individual employees. Although flexibility involves working practices that promise greater freedom in relation to work, access to them is limited to more privileged workers. Moreover, flexibility compels and rewards a spirit of self-entrepreneurialism and adaptability and therefore comes at the price of the increasing encroachment by work into the once more bounded sphere of ‘private life.’ Rather than the flexible worker taking control of work, work has enveloped the life of the flexible worker and created a subject more committed than ever to devoting his or her energies to its demands. The ‘refusal of work’ and a universal basic income would help release the emancipatory potential of flexibility.

Working in private homes, often isolated from the community and denied the legal rights and protections that most other workers enjoy, paid domestic laborers make up some of the most socially marginalized, vulnerable, and exploited workers in the United States today. This article explores the theoretical possibilities for an account of justice, based on the concept of recognition, to critique their work experiences, legal exclusion, and social status. To do so, it draws on the contrasting accounts of recognition advanced by Axel Honneth and Nancy Fraser, which focus on the psychological and the socio-structural dimensions of recognition respectively. While both theories generate compelling critiques of the conditions of domestic laborers, it is shown that neither one alone can capture the full range of injustices experienced, and that each can in fact complement the other. The article thus sketches an account of justice based on both the psychological and socio-structural dimensions of recognition.
Powered by